The faculty below have offered courses and programs for Gonpo Ludup in the past.

FPMT Lama & Maitripa College President Yangsi Rinpoche “was recognized as the reincarnation of Geshe Ngawang Gendun, a renowned scholar and practitioner from Western Tibet, at the age of six. Rinpoche trained in the traditional monastic system for over twenty-five years, and in 1995 graduated with the highest degree of Geshe Lharampa from Sera Je Monastery in South India. He then completed his studies at Gyume Tantric College, and, in 1998, having the particular wish to benefit Western students of the Buddhadharma, Rinpoche came to the West to teach and travel extensively throughout America and Europe. Rinpoche is the author of Practicing the Path: A Commentary on the Lamrim Chenmo, published in 2003 by Wisdom Publications. Rinpoche teaches in English, and is admired wherever he travels for his unique presentation of the Dharma, his interest in and enthusiasm for Western culture, and his evident embodiment of the wisdom and compassion of the Buddhist path.” – From Maitripa.org

Geshe Thubten Sherab was born in 1967 in a small village in the province of Manang (pop. 200), in the western part of Nepal. He entered Kopan Monastery in Kathmandu at the age of nine and at age 20 went on to complete his Geshe Studies (the equivalent of a PhD in Buddhism) at Sera Je Monastic University in South India where he studied from 1987- 2000, followed by a year at Gyume Tantric College. Geshe-la has served as Head Master of Kopan Monastery’s school, overseeing debate training and tantric training activities; served on FPMT’s board, and at FPMT’s International Office. Geshe-la is fluent in English and teaches at our centers around the world.

Geshe Sangye, a Sherpa monk from Kopan, our sister monastery in Kathmandu, happily accepted our invitation to come to Laguna Beach during his two-month study program  at UCI.

A student of Lama Zopa Rinpoche, our spiritual director, Geshe-la has been a monk since he was nine years old, and last year graduated from Sera Je Monastic University, where he now runs a school with a modern curriculum for the young monks.

Australian ex-Catholic, ex-political activist, ex-radical feminist, and former body guard for the Dalai Lama, Robina Courtin has been a Buddhist nun since 1978. Well known for her work for 14 years with people in prisons in the US and Australia, Robina’s life and work is the subject of the award-winning documentary Chasing Buddha, featured at Sundance in 2001. A renowned teacher of Buddhist psychology and philosophy, she teaches full time around the world at the centers of her teachers’ organization, the Foundation for the Preservation of the Mahayana Tradition (FPMT).

Ven. Sangye Khadro (Kathleen McDonald) was born in California in 1952 and took her first courses in Buddhism in Dharamsala, India, in 1973. She was ordained as a Buddhist nun at Kopan Monastery, Lama Thubten Yesheand Lama Zopa Rinpoche‘s monastery in Kathmandu, in 1974, and in 1988 she took the full ordination, or gelongma, vows. She has studied Buddhism with various teachers around the world: Lama Zopa Rinpoche, Lama Yeshe, His Holiness the Dalai Lama, Geshe Ngawang Dhargyey, and Geshe Jampa Tekchog, and more. At the request of her teachers Ven. Sangye Khadro began teaching in 1979 in England, and since then has taught at our centers around the world, including at FPMT‘s Amitabha Buddhist Centre (ABC) in Singapore, for 11 years. She is a 2015 graduate of FPMT’s Master Program, a seven-year program at Istituto Lama Tzong Khapa in Italy. Her book, How to Meditate, is a best selling book of Wisdom Publications now in its 17th printing.

Ven. Losang Drimay is one of the resident nuns and teachers at FPMT center, Land of Medicine Buddha, in Santa Cruz. She has been a nun for nearly 25 years.

Ven. Drimay was born in California in 1960. She has a B.A. in Asian Studies and has traveled extensively in Asia, but met her teacher, Lama Zopa Rinpoche, here in the U.S. She has been studying, practicing and working at Rinpoche’s centers since 1984, receiving hundreds of hours of classroom instruction from the many qualified lamas and senior teachers that frequent our FPMT centers, including His Holiness the Dalai Lama, Lama Zopa Rinpoche, Geshe Ngawang Dakpa and more. 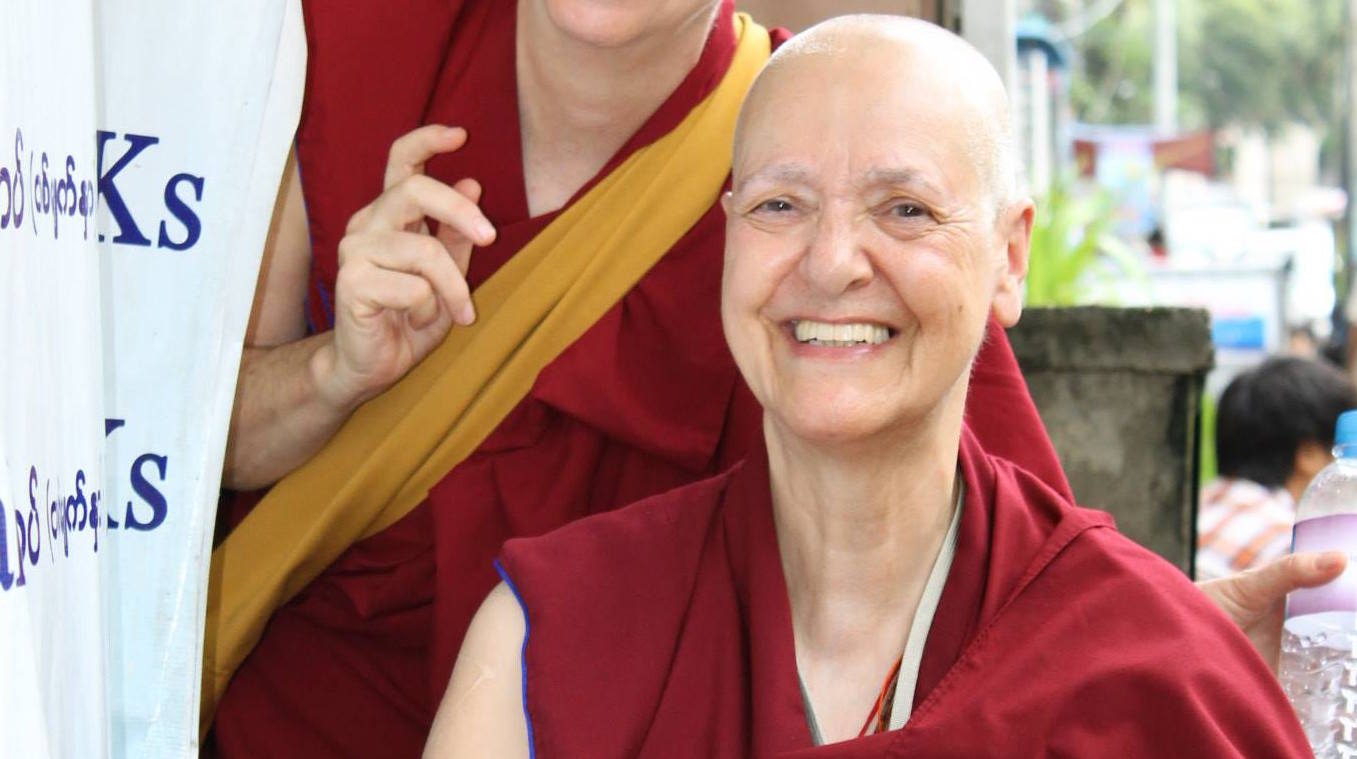 Ven. Gyalten Palmo grew up in San Francisco and started studying Tibetan Buddhism in 2000. She has studied closely under Ribur Rinpoche, His Eminence Choden Rinpoche, Geshe Ngawang Dakpa and Lama Zopa Rinpoche, and completed FPMT‘s five-year Basic Program. In 2012, she was ordained by Choden Rinpoche at Sera Jey Monastic University in India. As an FPMT-registered teacher, she has been teaching Discovering Buddhism regularly since 2013 at Tse Chen Ling Center, our San Francisco center. Ven. Palmo loves studying and sharing the Dharma with others.

Originally from Perth, Western Australia, Ven. Katy Cole has a Masters in Clinical Psychology and has been a Buddhist nun for 12 years. She ordained with His Holiness the Dalai Lama in Dharamsala in 2004. Since 2003, Ven. Katy has served in a variety of positions supporting Lama Zopa Rinpoche‘s FPMT: as Liberation Prison Project‘s spiritual program coordinator and chaplain coordinator and on LPP’s US Board of Directors; as one of the monastics at Rinpoche’s home in Aptos, looking after the hundreds offerings completed there everyday; and as assistant to the caretaker at Lawudo Gompa, Rinpoche’s family’s home and FPMT retreat center in the Nepalese Himalayas. In 2008 Ven. Katy completed a one-year retreat at FPMT’s De-Tong Ling Retreat Centre on Kangaroo Island, just south of Adelaide in South Australia. She has also completed several retreats at Lawudo Gompa, as well as various Vipassana retreats for 10 years before meeting her Tibetan Buddhist teachers.

Tubten Pende, a.k.a. Jim Dougherty, has been a practicing Buddhist since 1972 when he was introduced to Tibetan Buddhism in India. Pende was included in the first wave of FPMT’s Western Buddhist teachers. He was the coordinator of the Geshe Studies Program at Manjushri Institute in the UK; spiritual program coordinator, director, and later resident teacher at Nalanda Monastery in France; and an FPMT International Office Education Services program developer of the Masters Program at Istituto Lama Tzong Khapa in Italy. He is interested in the effective application of Buddhist theory and practice in the daily life of ordinary people.

Don Handrick is the resident teacher at Thubten Norbu Ling in New Mexico and also teaches at FPMT’s Ksitigarbha Tibetan Buddhist Center in Taos. Don has served on the board of Liberation Prison Project, has taught Buddhism prison, and corresponds with several to LPP students in prison. Don’s study and practice of Buddhism began in 1993 when he read The Tibetan Book of Living and Dying by Sogyal Rinpoche. Over the next two years, he practiced with Rigpa, Sogyal Rinpoche’s organization, until he began attending classes with Ven. Robina Courtin at Tse Chen Ling, the FPMT center in San Francisco.

At the beginning of 1998, Don left the Bay Area to attend FPMT’s Masters Program of Buddhist Studies, a full-time seven-year residential study program in Tuscany, Italy, taught by Geshe Jampa Gyatso. By 2004, he successfully completed the program and received an FPMT final certificate with high honors. Soon after, Don moved to Santa Fe and served as the Spiritual Program Coordinator for TNL, and in 2006 he was appointed Resident Teacher.

• Don was one of our annual Teachers in Residence.

Miffi Maxmillion runs the spiritual program at Langri Tangpa Centre in Brisbane, Australia and is an FPMT registered western teacher. She left behind a thriving haute couture and costume business in Melbourne, when her mother Inta Mckimm (who ran LTC) became sick with cancer in 1997. Packing her bags for two weeks, she is still here 19 years later! Miffi was brought up a Buddhist and had the great good fortune to play with Lama Yeshe as a child, and his hook of compassion sustained her through the many rebellious stages of growing up. She readily admits to watching far too much TV and is an avid New Yorker magazine reader.

• Miffi taught Every Day Dharma for Daily Life, an international online course and part of our Fall 2017 program.

Kerry first started working for Lama Zopa Rinpoche and FPMT at Jamyang London in 2004, where he studied with Geshe Tashi Tsering, completing the Foundation of Buddhist Thought course. He then moved to Nalanda Monastery in France, and studied the Basic Program under Geshe Lobsang Jamphel. He then started their first Masters Program as student and program coordinator. After two years, he left Nalanda to work as SPC at the new Land of Joy Buddhist Retreat Community in the UK before finally moving to Leeds to take the role of director at Jamyang Leeds  in September 2015. He also works part-time as a professional singer and conductor in the UK.