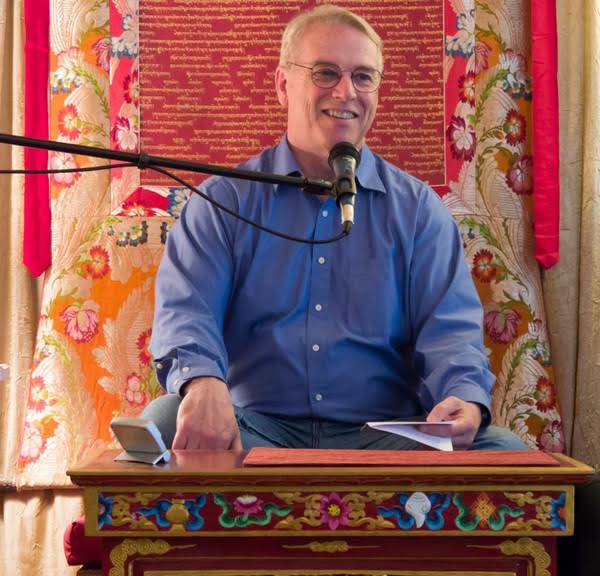 One of our international online classes. Anyone around the world can register and join from their computer in their own home. You can check the time Pende’s class will take place at your location here.

“Tubten Pende is one of FPMT’s most senior teachers,” says Merry Colony, director of Milarepa Center in Vermont and former director of FPMT Education. “As a monk Pende studied with Khensur Jampa Tegchok at both Manjushri Institute and Nalanda Monastery for many years. Pende was instrumental in getting FPMT’s Masters Program off the ground and headed up FPMT’s Education Department in the 1990s. Later he was one of the FPMT senior teachers invited to help formulate the Discovering Buddhism program. Since its inception, Pende has been involved with the program, first as a teacher of module 12, the Wisdom of Emptiness, and later as an elder for the DB online forum and assessor for DB certificate students. Pende has always stood out as an exceptional teacher of all topics, but most especially emptiness, having the very sharp analytical mind necessary for delving deeply into this profound topic. Pende’s presentations are always exceptionally clear and to the point.”

AN INTRODUCTION TO EMPTINESS
The Buddha taught that all our experiences – whether happy or unhappy ones – originate in the mind with the intentions that motivate our actions. Whether our actions are proactive or reactive, they all involve the awareness of ourselves responding to our outer or inner environment. Consequently, our view of ourselves is crucial in determining the quality of our interactions and experiences. The Buddha identified a common flaw in how we view ourselves that leads to isolation, selfishness, other destructive emotions and unhappiness. Removing that flaw is the purpose of his teaching on the emptiness of that wrong view’s projection.

ABOUT PENDE
Tubten Pende, a.k.a. Jim Dougherty, has been a practicing Buddhist since 1972 when he was introduced to Tibetan Buddhism in India. Pende was included in the first wave of FPMT’s Western Buddhist teachers. He was the coordinator of the Geshe Studies Program at Manjushri Institute in the UK; spiritual program coordinator, director, and later resident teacher at Nalanda Monastery in France; and an FPMT International Office Education Services program developer of the Masters Program at Istituto Lama Tzong Khapa in Italy. He is interested in the effective application of Buddhist theory and practice in the daily life of ordinary people. 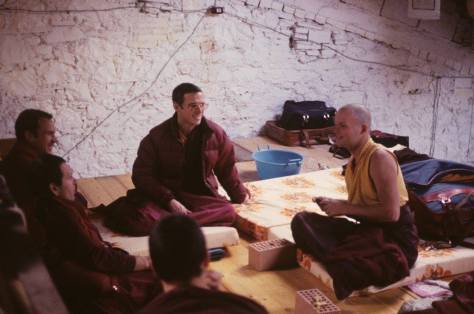 Former FPMT monks Tubten Pende, center, with Harry Sutton and others, including Helmut Hohm and Jimi Neal at our center in Pomaia, Istituto Lama Tzong Khapa, for the Six Yogas of Naropa, a three-week course/retreat, given by Lama Yeshe in 1982–83 to 150 students.  Photo: Tubten Pende.

“Tubten Pende is an old friend and fellow student of Lama Thubten Yeshe,” says FPMT teacher and Buddhist nun Ven. Robina Courtin. “We studied together years ago. He’s a scholar and a practitioner, and I highly recommend his teachings.”

“I first met Pende at the fifth Kopan course in the fall of 1973 – he’d been studying at the Tibetan Library in Dharamsala – and was immediately impressed by his intelligence and appreciation of the Dharma,” says Dr. Nicholas Ribush, director of FPMT‘s Lama Yeshe Wisdom Archive. “We were ordained together a couple of months later and he then went on to study in great depth, especially with the late Khensur Jampa Thekchog at Nalanda Monastery, to become one of the most learned and respected teachers in the FPMT. Students can learn a lot from him.”

You can check the time Pende’s class will take place at your location here. Timing is great for the West Coast of the US + Canada; Australia & New Zealand; Singapore, Malaysia and more.